Not to burst anyone’s bubble… but Sangria is not a drink that Spaniards drink. I know, I was shocked too. But I want to tell you this before you head over there on a trip, better to know now than embarrass yourselves. But let’s back track for a moment…

Sangria does in fact historically come from Spain and Portugal. What happened in ancient times, when the Romans were trotting about all of Europe all willy-nilly like they owned the place (oh, wait they did), they were always planting vineyards everywhere they went because water at the time was absolutely unsafe to drink, so they needed alcohol, delicious wine, to mix with the water and kill the bacteria before they could have it. (What I want to know is, if they were all bloody smashed the whole time, then how the hell did all that architecture happen?). Anyway, to make the weird wine and water mix a little more drinkable, especially for the kiddos (hey, they can’t have bacteria either), in Spain people started adding local berries, herbs and spices to alter the taste. And so, you had the start of Sangria. Cut to the 1960s at the World Fair in New York, USA. A booth from Madrid introduced Sangria to Americans in it’s more modern and evolved form: A wine punch, made usually of red wine, fruit, water and perhaps either soda, juice or sweet nectar of some kind. As you probably know, the obsession commenced immediately, and ever since then, American tourists have been hopping the pond in hopes of a Sangria-filled Spanish vacation, and that’s when they’re unpleasantly surprised.

Today in most of Spain, Sangria is one of three things which are as follows. 1. A cheap, sweet drink for rascally teenagers. 2. A drink to enjoy without getting slammed when at a public festival with your family. 3. A tourist trap.

Buying Sangria at a bar is probably the fastest way to let everyone around you know you aren’t from there, and asking your new Spanish friends where the best Sangria is at might get you a few laughs. If you really want to try it, try it, Sangria it up, tour away you little tourist you, but just don’t be let down when it is not the affordable sweet party nectar you are used to seeing at bars back home. If you want to go more authentic Spain, but really had your heart set on that fruity glass of goodness, instead try calimocho, a cocktail of red wine and coke, if you’re in northern Spain, and if you’re in southern Spain order a tinto de verano, red wine and lemon Fanta, for a similar sangria taste and feel.

What will you drink in Spain? 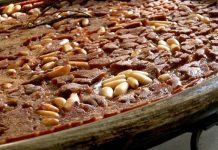 Sweet Chestnut Recipes To Take You Around The World